Smarty Bubbles one of the best known and most played bubble shooter games in the world wide web and in the app stores. It will challenge your skills with each new attempt.

Play one of the original Classics

With its simple and addictive gameplay it will motivate you to beat your high score over and over again. Simple yet addictive Match 3 gameplay makes it easy to learn, but hard to master. Are you good enough to beat this game? As a classic high score game this it does not end when you have finally beaten it for the first time. In fact, that's the point of no return. Because now you have achieved your first success. But you will want more. More points to be exact. With each new attempt you will learn to play more strategically, more patient and just overall more skillful.

Connect 3 or more bubbles of the same color and see them disappear immediately. Like in other match 3 games it requires you to think ahead, be quick and efficient. If you do that you will be able to burst huge clusters instead of only 3 or 4 at a time. And that is where the big points await you. The bigger clusters you burst with a single blow the higher your rating. 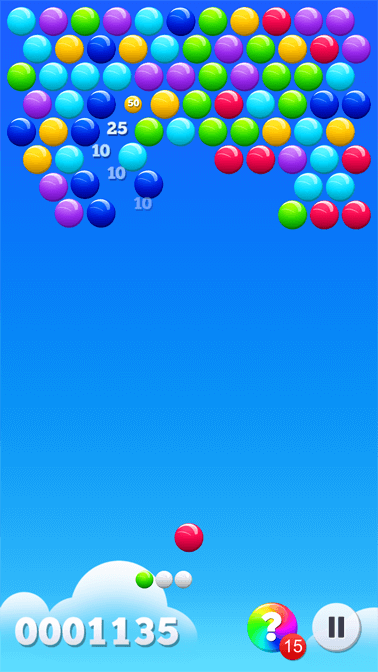 These kind of skill games have a very nice side effect, by the way: they improve quick thinking and coordination skills. And sometimes they will test your patience as well. Smarty Bubbles earns its place in this Top 10 list as one of the most successful games of its class. You can download it right now for your Android or iOS smartphone or play it in your browser immediately.

Of course it is not the only game of its kind. If you are more in the mood for something tasty and sweet for example, why not try the wonderful Candy Bubble and sink into a world made of candy.

What is a bubble shooter?

Generally all of these games are based on the same basic gameplay component: you shoot colorful bubbles onto the playing field. So far so good. But since these games also belong in the famous Match 3 category there is another vital detail that unites all of them: you have to match colors together in order to remove the bubbles from the screen. The ultimate goal usually is to get rid of all of them. However this gameplay mechanic comes with as many variations as there are games on the market.

What are the different Types of Games

Among the many different shapes and sizes that these games come in, there are a few that stand out and that you will often stumble upon.

Everything has a beginning. So do Bubble Shooters. Long before we all became avid mobile gamers there was a game that kickstarted what would become one of the most played genre in the history of gaming. And it goes by the name of Puzzle Bobble. Or as North Americans might know it: Bust A Move. It was a level-based game with the only goal to clear each level. The playing field was filled with a certain pattern of colored bubbles and had to be cleared by matching at least three of the same color together. The order in which the shooting bubbles appeared were random. In order to cater experienced players Puzzle Bobble already had a sophisticated high score system that most games of today have adopted from their predecessor.

This is the basic version without fancy upgrades or tons of levels. It's a classic endless game. You play until you see the Game Over screen. And then you play again, because you surely can beat that last high score you achieved. And then you play again because you could definitely have been playing a little more strategically. And now you're hooked in that addictive spiral of "Just one more round". That's what it is about. A seemingly simple game that will keep you coming back for weeks or more.

There are lots of bubble shooter games out there, both in the app stores and on the web. All of them rely on the classic formula of the above mentioned variations. But there are lots of different gameplay twists and modifications that will heavily change how the game is played, what the main goals are and what skills you need. Some will immerse you in a storyline or a meta strategy game, others will ask you to achieve specific level goals or increase the difficulty with a rotating playing field. There are multiple variations, but there is one thing they have in common: bubble shooters belong amongst the most played games of all times and are certainly one of the most important pillars of the mobile and casual games industry.